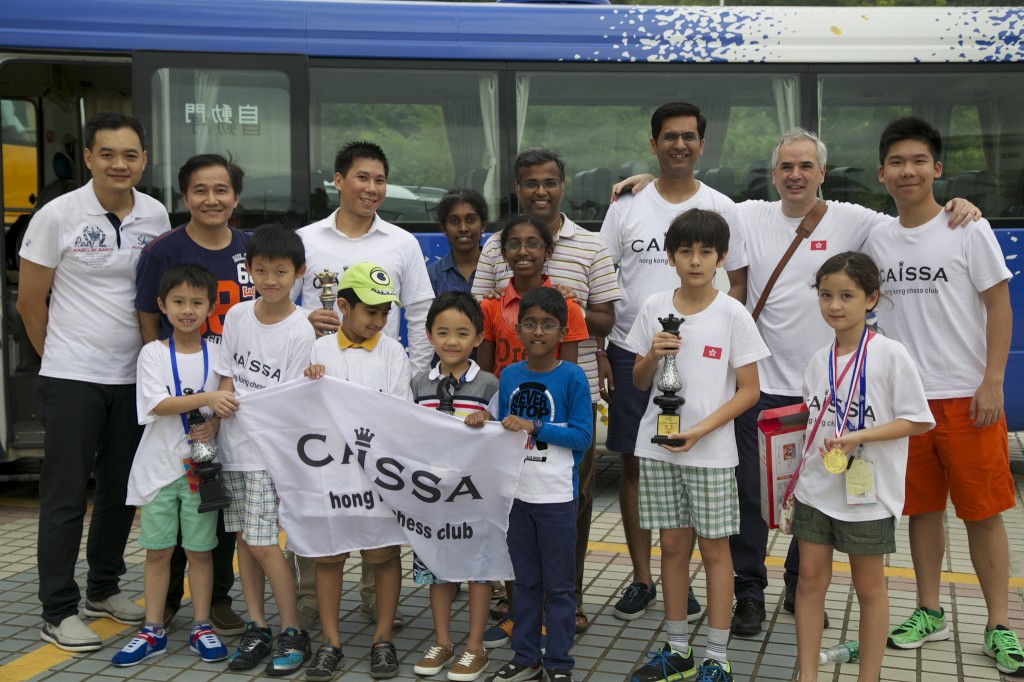 With 8 players and 6 accompanying adults we set out on Sunday 26 to play in the Nanao Cup 2015, an event deep in Shenzhen inviting players from Shenzhen, Macao, Taiwan and Hong Kong to join. While at the venue we found more players from Hong Kong and as such we had a good representation. 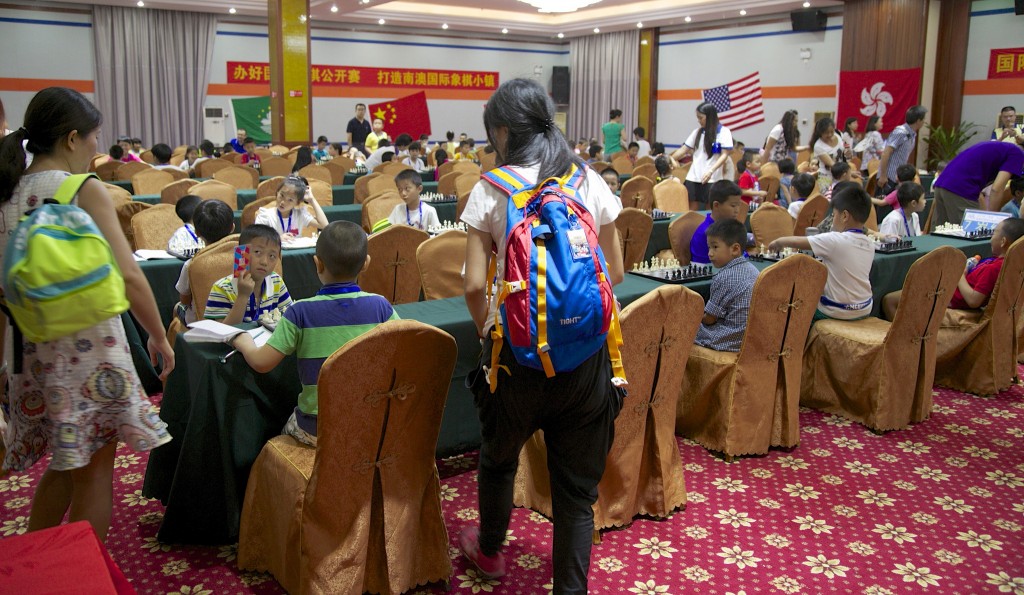 Crowded with over 250 Participants … 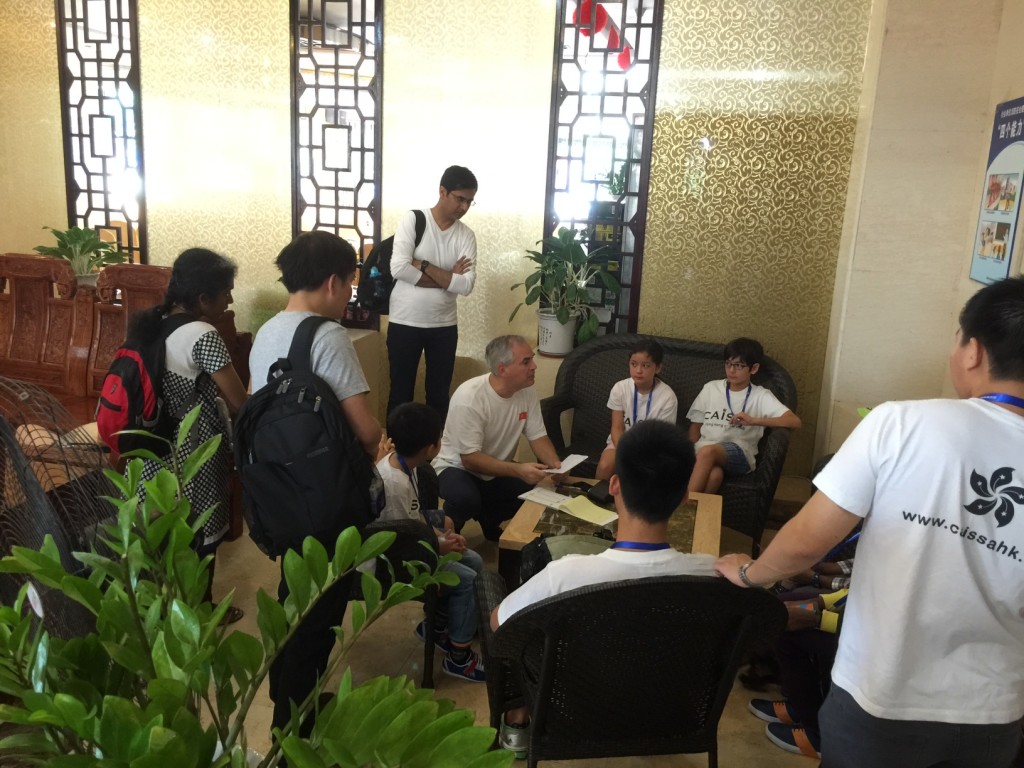 But the Hong Kong players were up for the task.

In the U6 Group we had Caissa’s upcoming star Mahir, who learned how to play chess just a few months ago, ending 6th place with 5 points – and he received a medal for this result. That is an excellent result as particularly in this age group Chinese youth is comparatively strong. 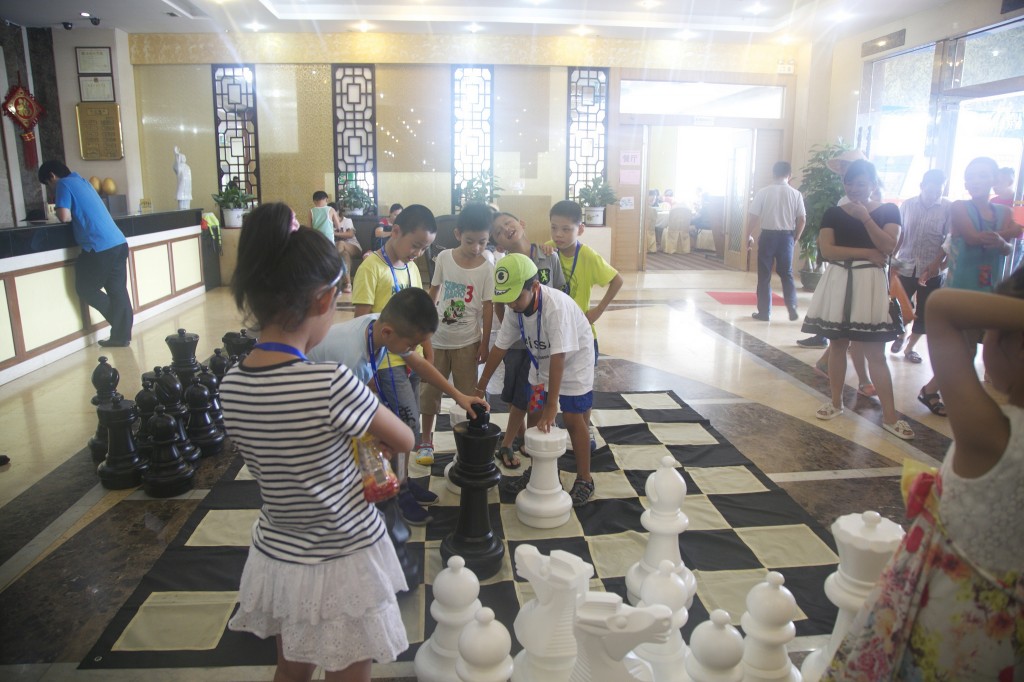 Mahir warming up in the lobby with new friends from Shenzhen 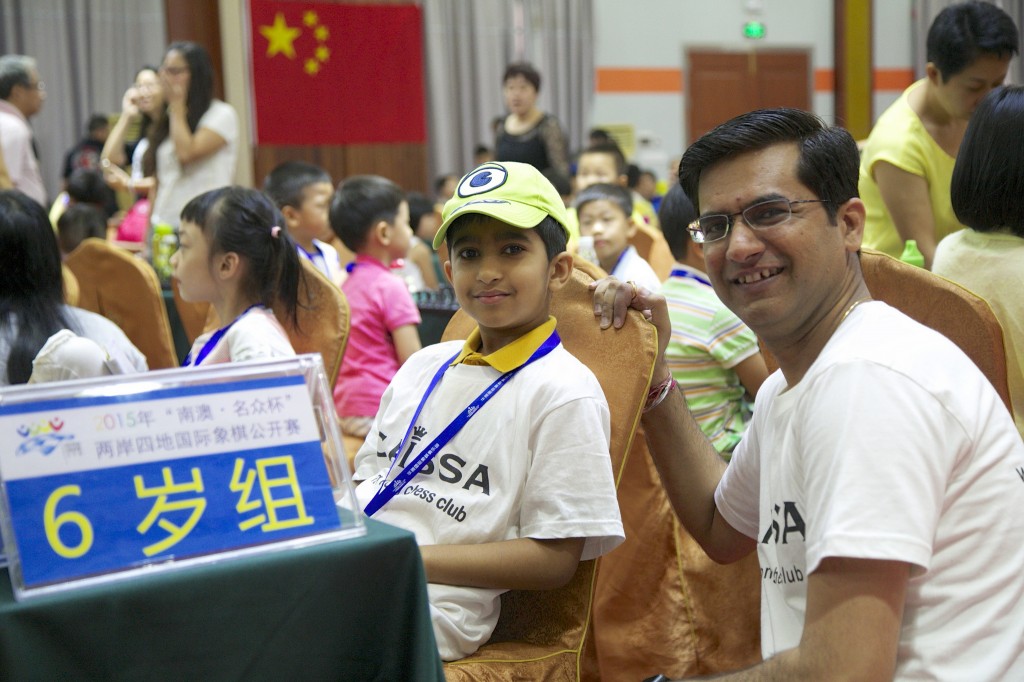 Mahir and his dad ready for the next round

In the U7 group we had Zig and Thanneermalai play for Hong Kong. When Thanneermalai had gotten used to the magnetic chess boards and small sized pieces on the last day he was unstoppable with 3 straight wins. Together with his earlier 2 wins he collected 5 points to end on 12th place. Well done! 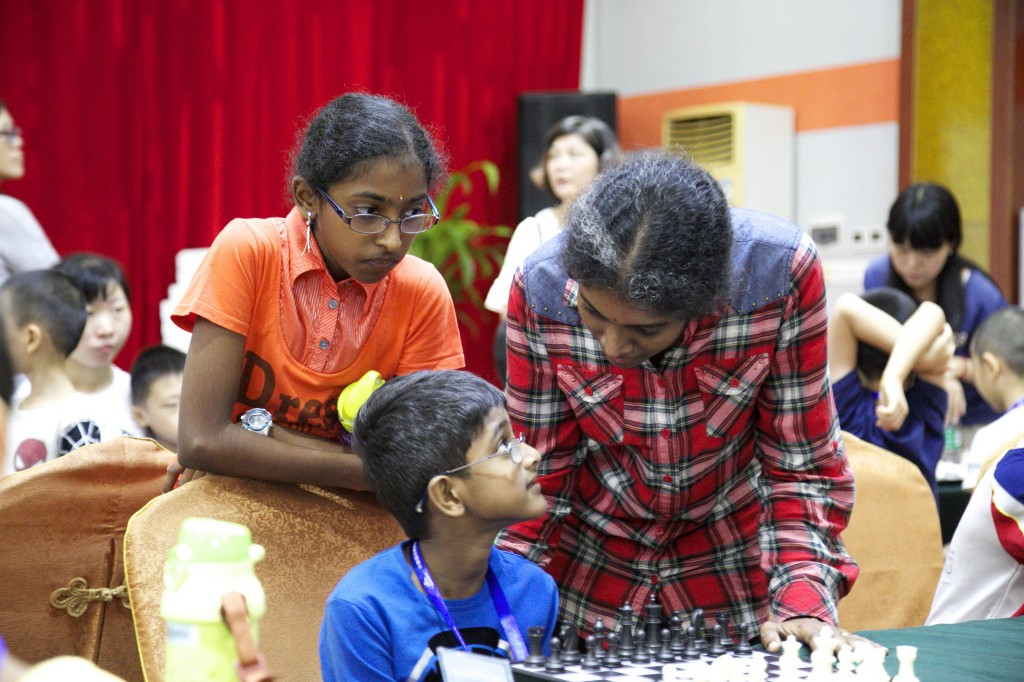 Zig was our other player in U7 and he played like a bulldozer. With 7 points he ended impressively on the 2nd place and received a nice trophy. Very impressive Zig! 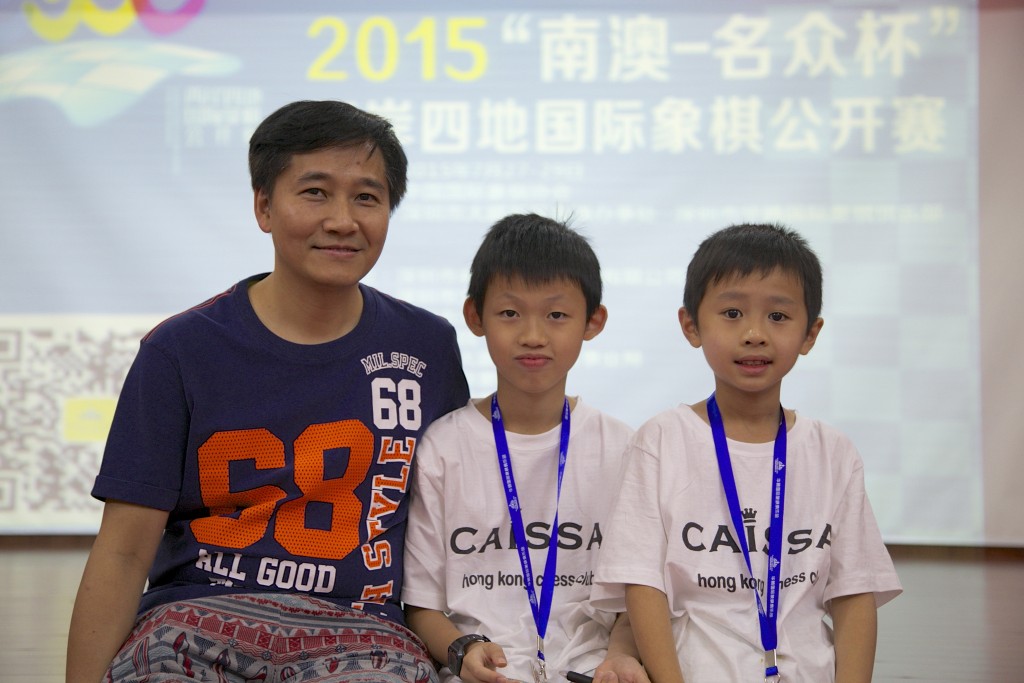 Zig with his brother Ngai and his dad 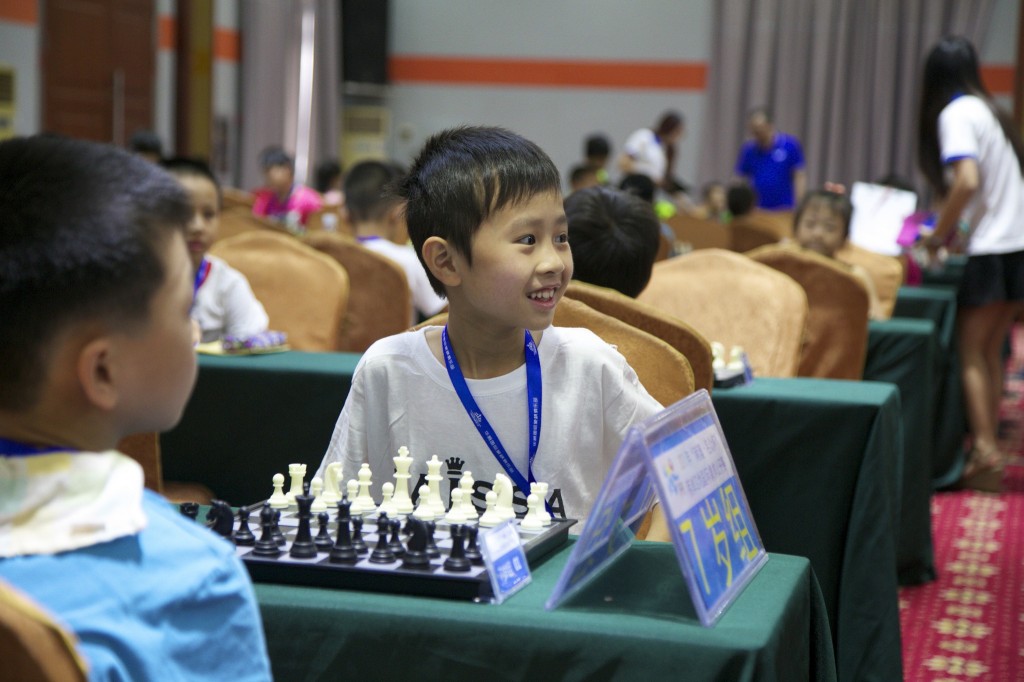 Zig confident every time before going into action!

We had no players in U8 but in U10 we had our Caissa gunners Miguel Angel and Mei Jing. And they lived up to their reputation.

Because Mei Jing lost her last game she fell down to 15th place but still on 5th place of all girls with 5 points. As such she still got a medal. Good job Mei Jing! 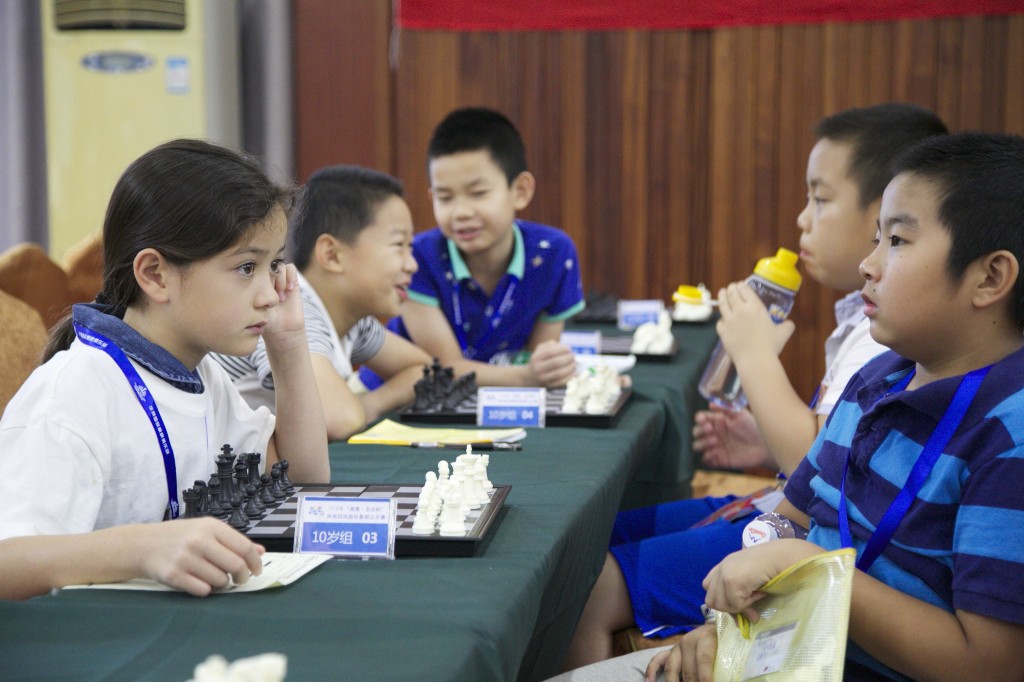 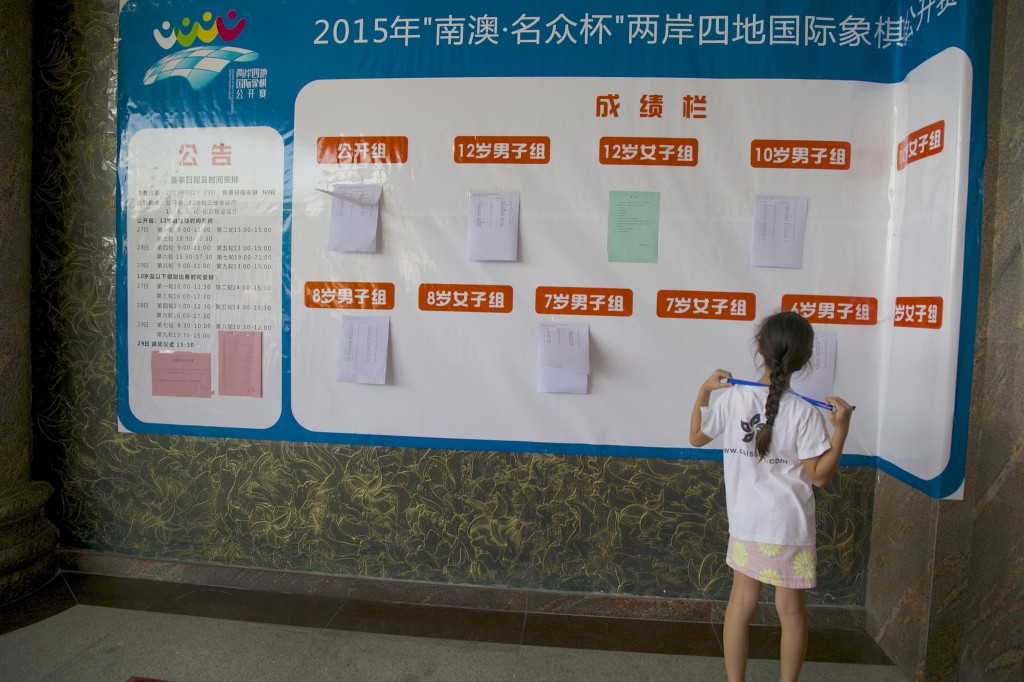 Yes Mei Jing – you still got a prize!

Miguel Angel played a great tournament. He lost once, coming just 1 move short in a pawn end game, and he drew once. The level of his play was very high and with 7.5 points he ended 2nd place! Miguel Angel got a chance to put his new opening to practice in this strong field. Great preparation for the Open Dutch next week. Well done Miguel! 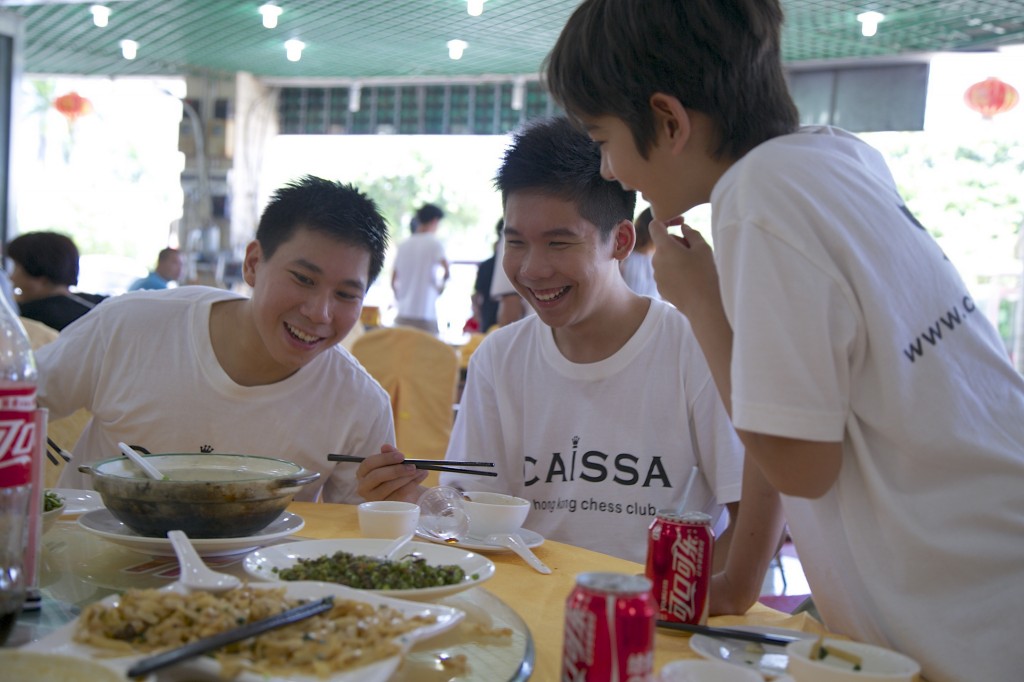 Miguel Angel with Melvin and Matthew – what is that we’re eating? A fish eye ball! 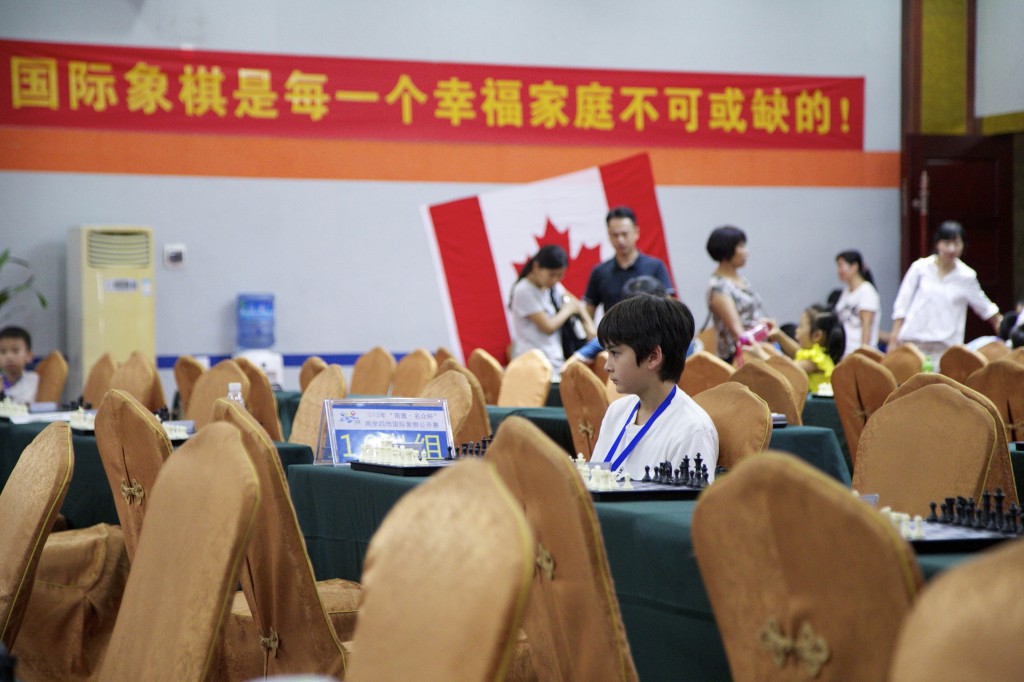 In the U12 category we had Ngai and Kannamai from Hong Kong. Kannamai scored 3 points and managed to get a 6th prize medal for girls. Good job Kannamai. 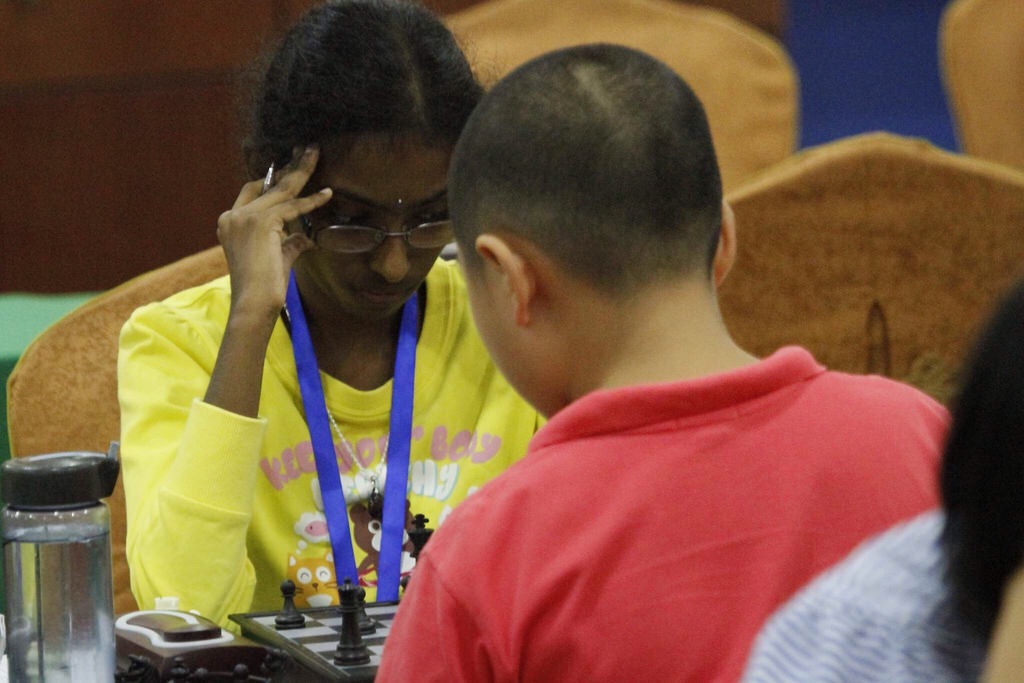 Kannamai on the stage – spot the proud dad … 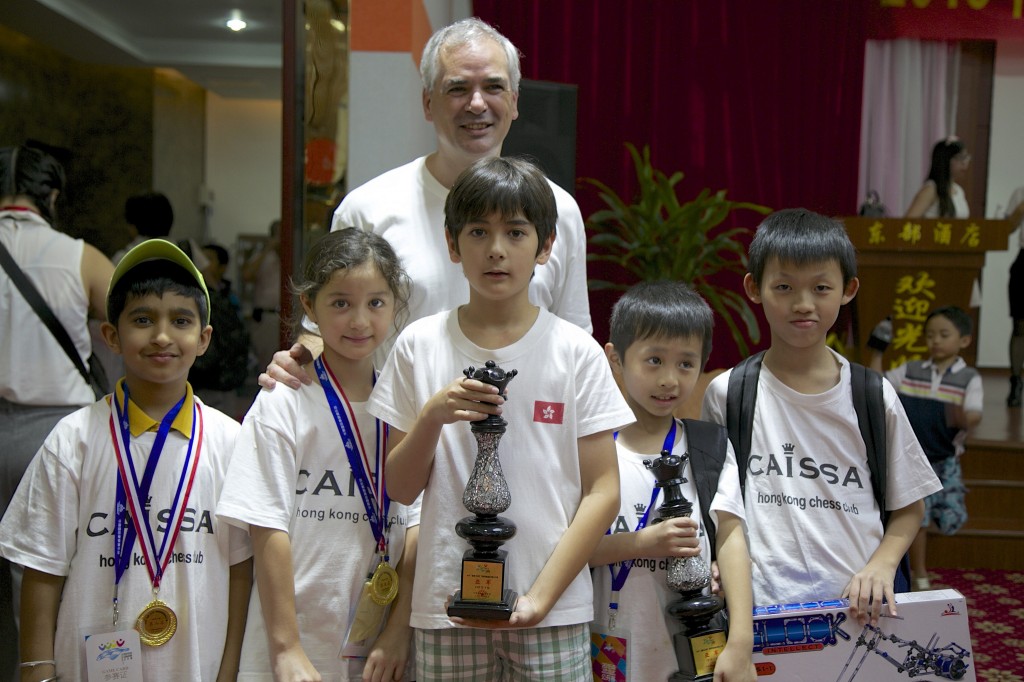 In the Open category we had Caissa’s star player U16 Melvin and star coach IM Matthew Tan defending our honor.

Melvin scored 3 points by playing a handful of draws. Some bad luck kept him from more points but as this event was in preparation for the Dutch Open Melvin will join next week, the experience was very much worthwhile for him. With a little adventurous play we will see the best of him in Holland. 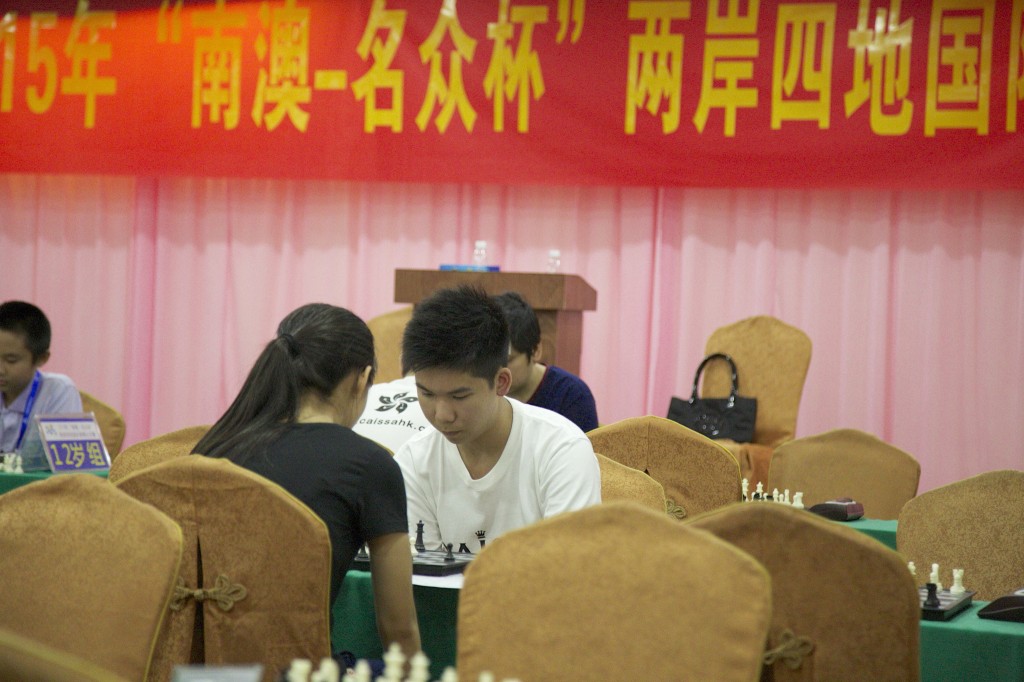 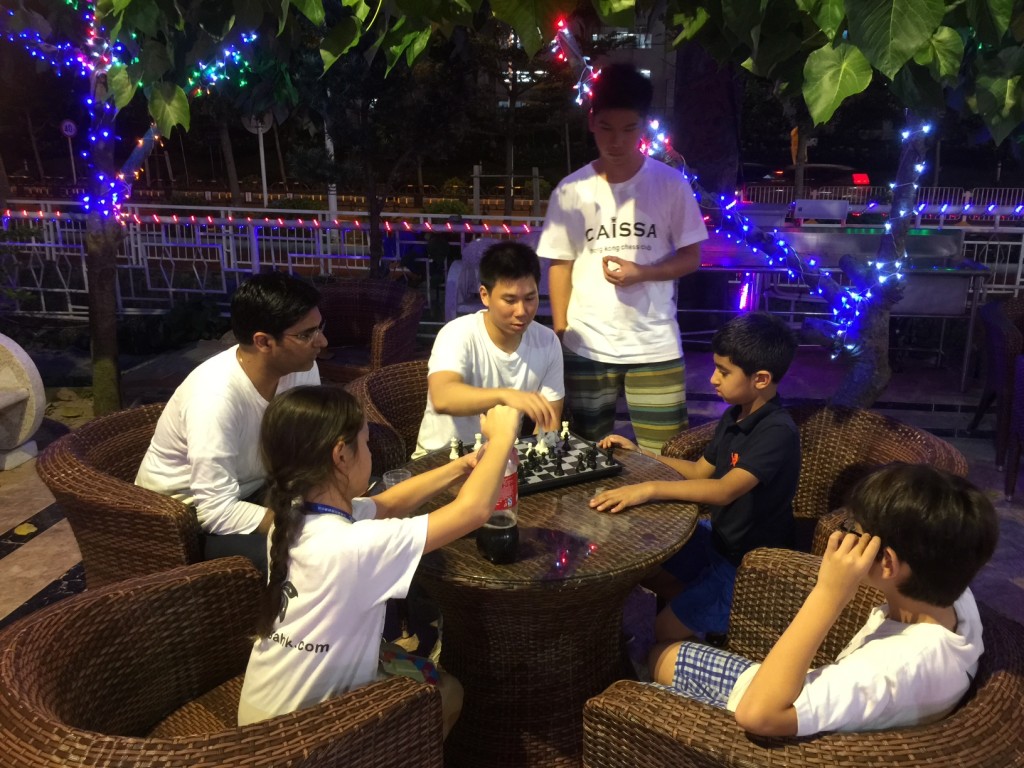 Matthew, among the top 3 in this group, all with 8 points, ended 2nd place on tie-break. Great score Matthew! 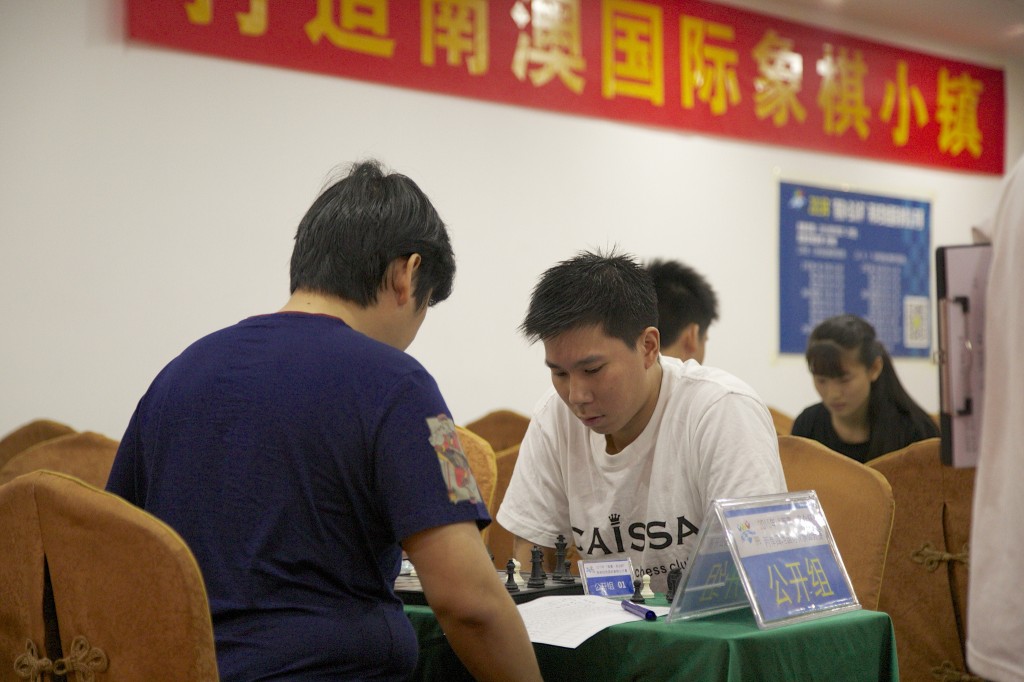 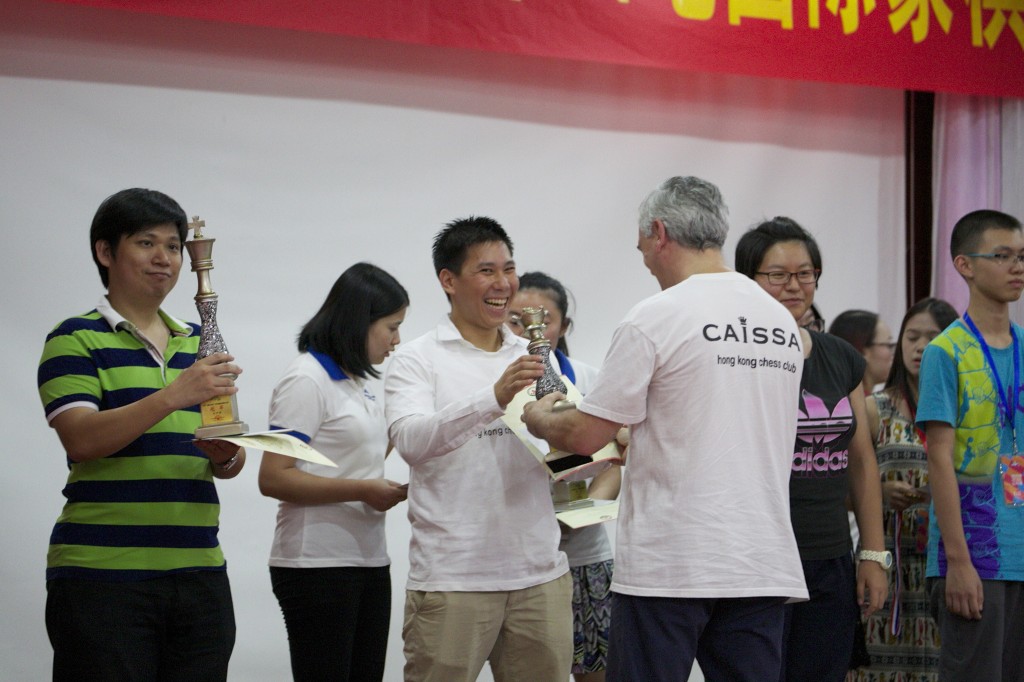 David handing out the prizes in the Open group – this one goes to Matthew! 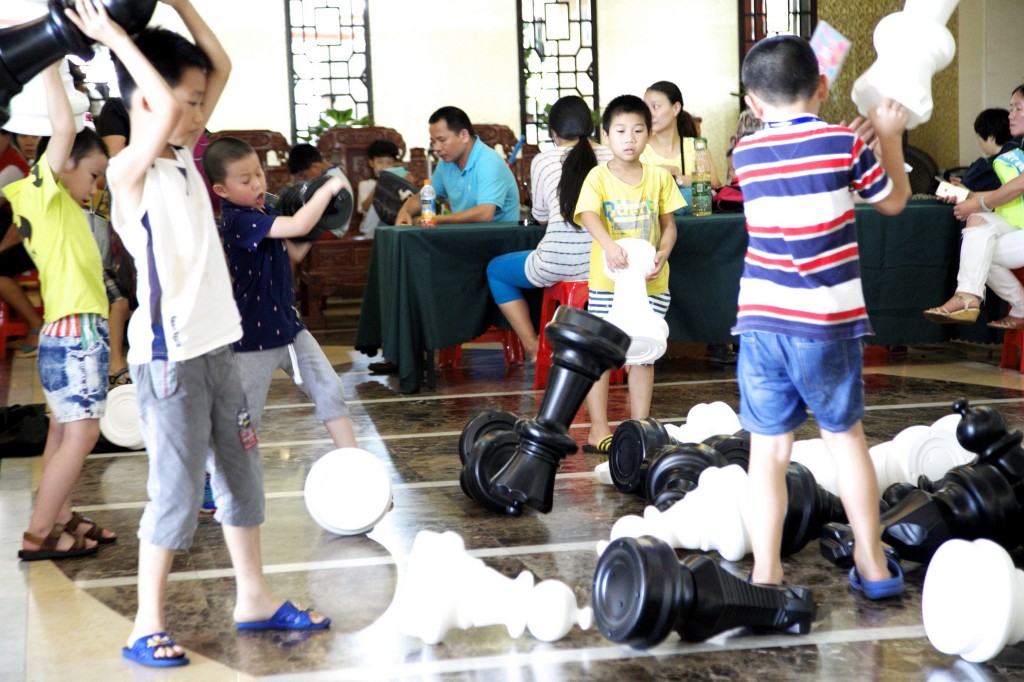 In the meanwhile … battle chess in the lobby… 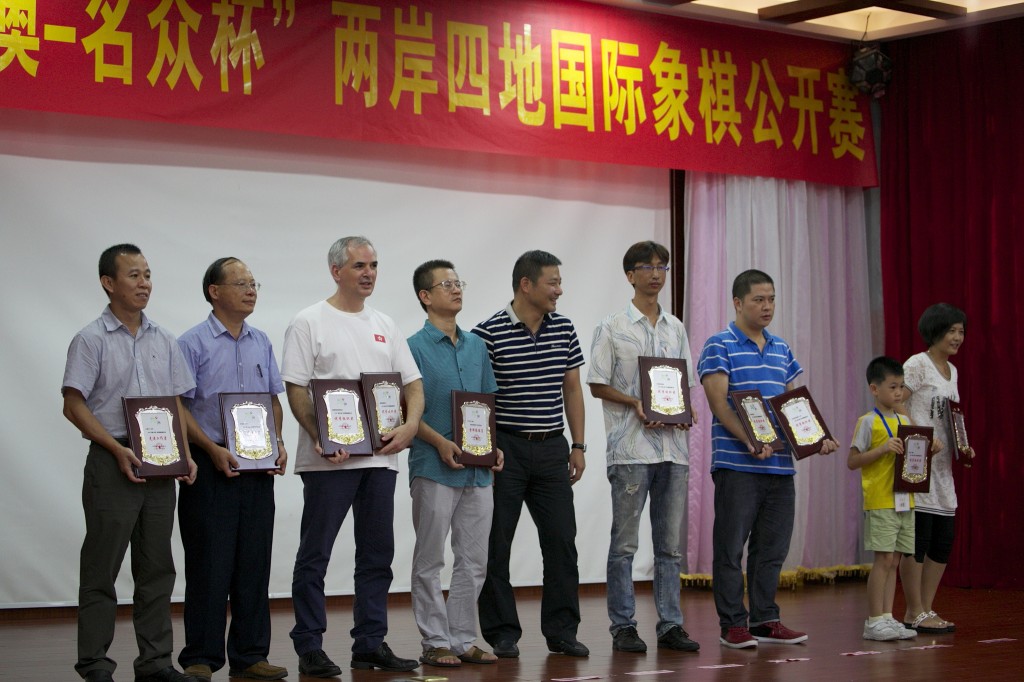 David with a commemorative plaque for Caissa and HKCF

Thanks all, players, parents, organizers. It was a great event in very good atmosphere. We’ll be back!